Stitch & Ai (安玲与史迪奇 "An Ling and Stitch") is a television series spin-off of Lilo & Stitch produced for Chinese audiences that premiered on March 27, 2017 on CCTV-1 and CCTV-14. It is the Lilo & Stitch franchise's third TV series, after the Western-animated Lilo & Stitch: The Series and the anime Stitch!.

The series was produced in English before being dubbed in Mandarin for Chinese broadcast, as the show was produced with the assistance of American animators, including those who previously worked on Lilo & Stitch: The Series. The original English version began airing on Disney Channel Asia on February 5, 2018.[1] On December 1, 2018, it was given a digital release in Western countries on the DisneyNow website and app, with the exception of the ninth episode "The Phoenix", although it has been removed from the service as of June 2019.

Stitch & Ai follows the events of Lilo & Stitch (and its subsequent film and television sequels up to and including Leroy & Stitch).[2] This series sees Stitch separated from Lilo after being captured by a gang of aliens who had hoped to utilize Jumba's research and use Stitch in their space war with another race of aliens. When Stitch escapes, he ends up re-entering Earth's atmosphere over China and lands in the Huangshan Mountains where he befriends a young girl named Wang Ai Ling and becomes part of her family. However, the Galactic Federation sends Jumba and Pleakley to keep a watch on Stitch and his Chinese family. They are concerned with a hidden function that Jumba secretly programmed in Stitch. This function, which causes Stitch to metamorphosis into a giant beast to fully carryout his destructive programming which can be triggered in a large city—which could be unleashed into the Galaxy if the warring factions figure out how to manipulate Stitch into activating his hidden programming. 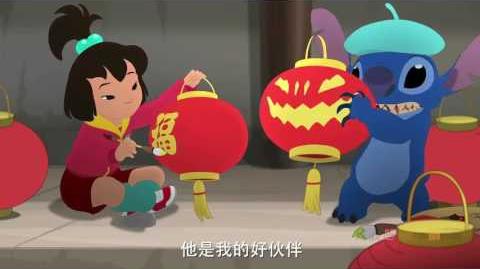 Stitch, Ai, and the whole gang

Stitch and Ai on dragons 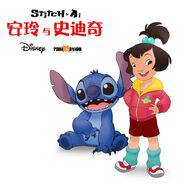 Official artwork of the titular characters

Poster of a sketch of Stitch holding a Chinese lantern

Interior shot of one of the spacecraft

A sketch of Stitch sitting made for Stitch & Ai

Retrieved from "https://liloandstitchfanfiction.fandom.com/wiki/Stitch_%26_Ai?oldid=16373"
Community content is available under CC-BY-SA unless otherwise noted.