Lilo and Stitch Wiki
Register
Don't have an account?
Sign In
Advertisement
in: Genetic experimentations, Experiments, Males,
and 4 more

Shrink is a small purple experiment with a white lower jaw and chest, three wobbly legs, two stubby little arms and two floppy antennae with two rings on each antenna that can zap a green ray from his antennae to change the size of objects. His picture appears on the wall of Jumba's lab in Leroy & Stitch, along with several other pictures of Jumba and Dr. Hämsterviel's early accomplishments. His one true place is a Keo Farm, making farm products bigger.

All 624 experiments including Shrink were round up by Leroy and taken to a stadium to be destroyed. However, Lilo, Stitch, Jumba, Pleakley, Reuben and Gantu arrived before the experiments could be destroyed

It is unknown whether or not shrink participated in the following battle between the experiments and the Leroy clones.

The Leroys soon gained the upper hand in the battle, but were defeated when Lilo, Stitch, Reuben and several other experiments performed the song Aloha Oe, which caused the Leroy army to shut down due to the original Leroy's failsafe. 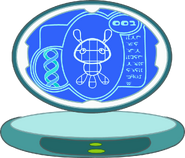 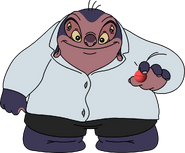