Lilo and Stitch Wiki
Register
Don't have an account?
Sign In
Advertisement
in: Genetic experimentations, Characters, Protagonists,
and 12 more

Experiment 625, now known as Reuben, is a character and former villain from the Lilo and Stitch franchise. Reuben is the sidekick of Gantu and cousin of Stitch. Reuben has every ability Stitch has but he prefers to make sandwiches than use his powers. He is voiced by Rob Paulsen in the films and television series and by David Whittenberg in the English dub of Stitch!

Before Stitch's creation and when Jumba was struggling with creating his ultimate monster, Reuben served as Jumba's primary assistant in the labs, though this mostly involved him making sandwiches for his master. When Stitch first gets loose on Turo, Reuben comes with Jumba to help him track the creature down, but eventually, the arrest would come and Reuben would be podded.

Reuben appears in the same blue color as Stitch in the prequel comics. This blue color was still kept in the early comics based on the show, persisting even in reprints.

During the evil doctor Hamsterviel's plan to take over the galaxy using Jumba's experiments, he activates the experiment pod. The pod was labeled 625 which is why Hamsterviel believed Stitch could be destroyed by his closest relative. Although he seemed dangerous, it was soon revealed that 625 is a lazy experiment that only wanted to make sandwiches. During the battle in Gantu's ship, Gantu's ship crashed and stranded in Hawaii. Inside the ship stranded Gantu and the wise-cracking 625.

Lilo and Stitch: The Series

Reuben (known as 625 at the time) is still stranded along with Gantu. 625 turns out to be quite intelligent and gives plenty of information about the experiments to Gantu. In the series, 625 was once commanded by Gantu to battle Stitch, but due to his lazy personality, he did not fight and was easily beaten.

Reuben plays a large role in the film. Gantu leaves Reuben to break out Hamsterviel and left inside the now junkyard type ship. 625 begins to make dozens of sandwiches to turn the ship into a sandwich shop. When Lilo loses Jumba, Pleakley and Stitch to the space world, she grows lonely and tries to communicate Stitch. She ask to use Gantu's communicator but was turned down by 625. Lilo then realizes she did not give 625 a name and after some failed attempts (as 625 can speak for himself about his name), finally named him Reuben. Lilo and Reuben then communicate Stitch, which was actually Leroy in disguise. Reuben aids Lilo in her mission to save Stitch. During the mission, Reuben and Lilo were imprisoned by the new ruler of the galaxy Hamsterviel. Gantu reforms and frees Reuben and Lilo. They then go to battle the Leroy clones along with Stitch and save the galaxy. As a reward, Reuben was given the honor of being the Galley Officer and work alongside Gantu to protect the galaxy.

After the events of Leroy and Stitch, Gantu was fired as captain once again and leaves to rejoin Hämsterviel and Reuben joins his friend. During the series he isn't much of an enemy to Stitch even visiting him sometimes. During "Onigiri Reuben", he becomes fond of Japanese Riceballs. In fact, he and Gantu were seeing Hamsterviel's plans fall flat on their backs so many times, that they both eventually just gave up being villans and became comic reliefs, They started this in "A Stinky Episode", where we discover Skunkuna and they think Hamsterviel had, as put by Rueben, "Had finally gone to Bonkersville". Then Gantu points out that he didn't have to take a long trip to get there. This went so far, Hamsterviel grew less and less on them and more on the experiments on Kuai'i.

Hamsterviel died, and the galaxy lived in peace forever. Reuben now lives with Lilo and Stitch.

Reuben was still Gantu's Galley Officer and ususally the straight man in terms of Gantu's friendship.  In the episode "Reben Comes Home" he decides to quit his job at the Galactic Armada much to the delight of himself and Gantu since they will both be independent and has been living with Lilo and Stitch ever since

Reuben makes occasional appearances at Tokyo Disneyland usually in parades along with many other experiments.

Reuben with Jumba and other experiments in "See Ya Later Stitch!"

Reuben with Stitch and other experiments 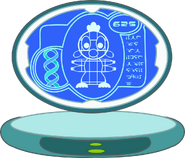 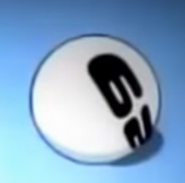