Lilo and Stitch Wiki
Register
Don't have an account?
Sign In
Advertisement
in: Characters, Protagonists, Female characters,
and 2 more

View source
watch 01:36
We're Getting Mutants in the MCU - The Loop
Do you like this video?
Play Sound

Lilo Pelekai is one of the 2 main protagonists of the series and movies (The other being Stitch). She is Nani's much younger sister. Lilo appears about five or six years old as a child and on "Stitch and Experiments" she appears as a teenager

Lilo has a spirited and highly eccentric personality. Although she has become even more eccentric due to the death of her parents. She is also somewhat of a troublemaker. Unfortunately her eccentricity is the main reason the other children treat her with disdain.

Over the course of her growth other kids start to treat her as a real human being seeing how she has matured both mentally and physically.

Her spirited and highly eccentric personality — especially in light of her parents' death — has somewhat alienated her from her fellow children, yet Lilo makes the perfect best friend for Stitch, an alien experiment whom she adopts as her dog. Lilo attends Hula school and her hobbies include the photography of fat people, talking about creatures from horror/sci-fi movies, and capturing and rehabilitating Jumba's evil genetic experiments.

Lilo also appears at the Walt Disney Parks And Resorts for meet and greets.

She knows how to whistle as seen in the episodes Drowsy and  Clip.

Lilo's mom and dad died in a car accident some time before Lilo & Stitch (it is suggested that rain made road conditions treacherous), and they have not appeared in the series apart from three photographs: one of Lilo, Nani, and their parents having a picnic on the beach, a photograph of Lilo's mother winning the Hula school's May Day celebration, and a photo of Nani with her parents when she graduated to intermediate Hula.

Lilo's mother is depicted as kind and loving (and perhaps eccentric like her younger daughter), as well as an excellent hula dancer. She would placate her children by holding a family night, singing lullabies, and making up funny constellations. Lilo's father played the 'ukulele and was the one who coined the phrase Ohana means family, and family means nobody gets left behind or forgotten. The phrase becomes a sort of family motto for his daughters and their intergalactic adopted clan.

Lilo loves and misses her parents very much. She keeps a picture of them under her pillow and initially would not allow Stitch to touch it (rejecting him when his fight with Jumba caused her house and the picture to become damaged). In the episode "Remmy", which takes place on the anniversary of the accident, Lilo is depressed and takes a nap to help deal with her sadness. The picture is used to turn Lilo's nightmares into a dream of the day the photograph was taken, which manages to make her happy again.

Lilo writes a thank-you note to an "Uncle Joe" in "Glitch/Woops". Otherwise, Lilo and Nani are the only known living members of the Pelekai family.

The development of Lilo's ohana (extended family) begins with the adoption of Stitch in Lilo & Stitch. Though Lilo technically owns Stitch by Hawaiian state law, the relationship between the two is more like siblings and best friends. By the end of the series, Lilo's ohana includes "Uncle" Jumba and "Aunt" Pleakley, David, Cobra Bubbles, the Grand Councilwoman, all 626 (627 is dehydrated, although it could be argued that he still counts) of Stitch's "Cousins", Victoria, Mrs. Hasagawa, Gantu and finally, Mertle and eventually Keoni, Gantu, Reuben, and even Dr Hamsterviel

In Lilo & Stitch, Lilo was late to a dance and got into a fight with Mertle. Because of this, she went home early before Nani showed up which led Cobra to believe Nani was irrisponsible. When she saw a shooting star,(which was really Stitch's stolen police cruiser) she wished she had a friend who could last forever, so Nani took her to buy a dog, and she chose Stitch. When Stitch lost his destructive personality, he left and took the book The Ugly Duckling with him. The next day, Jumba and Stitch got into a fight which destroyed Lilo's home which forced Stitch to reveal his secret. Lilo and Stitch were then captured by Gantu, but Stitch dropped back. Using an oil tanker, Stitch was able to rescue her and she convinced the Grand Councilwoman to let Stitch stay.

In Stitch! The Movie, Lilo and Stitch realized Jumba had smuggled his first 625 experiments along with him and his partner wanted them back. Jumba was captured and Lilo and Stitch activated 221, but he ran loose. They recaptured him and he helped free Jumba. However, when they freed all the other experiments, they were captured. Lilo was almost teleported away, but Sparky saved Stitch and he rescued Lilo. They were then assigned to recapture the other experiments.

They eventually recaptured them all and Stitch was assigned Captain of the Galactic Alliance, seperating him from Lilo in Leroy & Stitch until Leroy took over the Galactic Alliance. With help from Reuben/625, Lilo contacted Stitch, who was really Leroy in his form. She immediatly realized he wasn't Stitch when she saw he wasn't wearing the tiki necklace she gave him. She returned to Turo and she and Reuben were captured until Gantu helped them escape. With all the cousins, Lilo, Stitch, Reuben, Gantu, Jumba, and Pleakly defeated all the Leroy clones with Aloha Oe. Stitch then retired and the family rejoined.

Lilo was a first reappearance of Stitch! (anime), where she is a fully grown adult with her daughter named Ani, who looks exactly like she did as a child.

Lilo is also shown on the ABC series "Stitch and Experiments" part of Disney's One Saturday Morning and is now a teenager going to Tom Schumacher High School and still lives with Stitch and Nani, has a crush on Keoni and even gets along with Mertle and still has a love for Elvis as well as other artists.

Lilo as a dead hula girl from Spooky 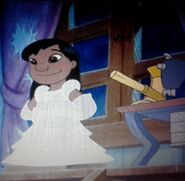 Lilo as a princess from Spooky

Lilo has 4 common outfit during the movie and the show