Lilo and Stitch Wiki
Register
Don't have an account?
Sign In
Advertisement
in: Genetic experimentations, Antagonists, Male characters,
and 7 more

Leroy is the evil twin brother of Stitch who first villain appeared in Leroy & Stitch. In promotional material for the film, Leroy was also referred to as Experiment 628. However, this is false as he was only called Leroy in the film and is the doppelganger of Stitch. Also, Leroy would really be Experiment 629, seeing as Jumba made 627 in an episode of Lilo & Stitch: The Series, then at the end, making 628 and locking the pod in his ship.

Leroy was the last of Jumba's experiments to be built. While spending a few years on Earth, he had an unfinished experiment at his laboratory in deep space. After Lilo and Stitch had successfully captured all 625 experiments and turned them from bad to good, Jumba regained access to his lab. During this time, Jumba's evil former partner Dr. Hämsterviel had escaped prison with Gantu's help and paid Jumba a visit. He ordered Jumba to finish the experiment as a red replica of 626 (Stitch). The orders were fulfilled and Leroy was created. Stitch then burst into the lab and battled Leroy, but Leroy defeated Stitch after the latter was distracted by Pleakley's untimely arrival. Leroy was later cloned by Hämsterviel to create an army.

Leroy disguised himself as Stitch to gain access to the BRB (Big Red Battleship). Once on board, he revealed his true form. When Lilo later tried to contact Stitch, Leroy made himself look like Stitch over the supercomputer. Lilo, however, knew it wasn't him because he didn't have the tiki necklace on him that she had given Stitch. After Leroy found out that Lilo exposed him as an imposter, he blasted the supercomputer.

While Hämsterviel and Gantu took over the Galactic Federation, one of Leroy's clones journeyed to Earth and captured all of the experiments with the exception of Gantu's lackey 625 (later known as Reuben). With their mission complete and Hämsterviel in control, the original Leroy waited at the Aloha Stadium, where the experiments prepared to be eliminated. Before they could be, Stitch and his entire ohana arrived. Leroy and his clones battled Stitch and his cousins. They seemed indestructible, but Jumba had secretly programmed a fail-safe into Leroy before he was charged: Leroy and his clones would shut down when they hear the song "Aloha Oe". Stitch, Reuben, Lilo and a reformed Gantu performed the song, and the Leroys were defeated. They were then sent to prison alongside Hämsterviel, and before the credits, Leroy and his clones were seen happily dancing to Elvis Presley's song, "Jailhouse Rock". 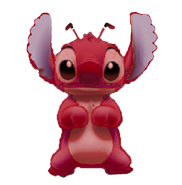 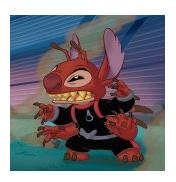 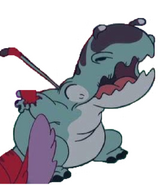