Lilo and Stitch Wiki
Register
Don't have an account?
Sign In
Advertisement
in: Genetic experimentations, Protagonists, Stitch's sidekicks,
and 8 more

Evile (also known as Experiment 627) is an antagonist villain from Disney's 2003-08 television series Lilo and Stitch: The Series. He is voiced by Chris Sanders, who also voices Stitch.

When Stitch's ego grew too large after a streak of captured and reformed experiments, Jumba created an experiment designed to be more powerful than Stitch that was completely evil and is impossible to turn good. His one weakness is his large sense of humor.

In the episode "627", Stitch grew a large ego and began bragging about how great and special he was. This began to annoy Jumba resulting into Jumba creating 627 nicknamed Evile. 627 broke away from Jumba's ship and wandered off into the night. He meets 625 who takes him to Gantu and becomes a minion to his schemes. For the next several days, 627 had successfully captured many experiments, leaving Stitch to believe he's not special. Stitch and Lilo learn that laughter is the only weakness to 627 and uses this in their next battle, defeating him and placing him back into a pod.

627 made his first appearance in "Stitch Does it Dangerously! Love's Strongest Rival". Here, 627 disguises himself as a prince to woo Angel and lure her into his castle. This also lures Stitch having him captured. It is revealed that 627 is working for Hamsterviel. Hamsterviel leaves Stitch and his friends to die in the castle but they are all rescued by 627 who was betrayed by Hamsterviel shortly before his exit. In this series he is voiced by Chris Sanders who also voices Stitch.

Evile is first reactivated in the first episode of the show "Home is Where the Ohana Is" by Dr Hamsterviel along with Leroy. He and Leroy later became Hamsterviel's henchmen and is just a sadistic and destructive as ever. In the episode "Cape Stitch" he plans to stalk Stitch in a manner used by Sideshow Bob from "The Simpsons" and he eventually battles Stitch abliet a little short when he realizes that he can survive in the water and when he was about to kill Stitch once and for all Stitch gave a last request for him to sing Queen's "Bohemian Rhapsody" in which after that he woke up his now escaped prisoners Angel, Sparky, Felix, Sample, Dupe and Slushy and since they were wearing pretty ridiculous pajamas Evile laughed and eventually passed out and he was sent to jail again. At the end of the first season he finally reverted back to good and was able to help Stitch defeat 628 in which Hamsterviel fired him to which Evile responded by telling him that a family is better than nothing at all. In this series he is voiced by Jack Black. 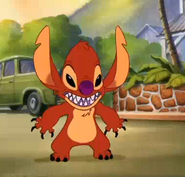 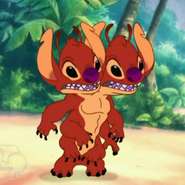