Disney's Stitch: Experiment 626 is a game for the Playstation 2. It also serves as a prequel to the original film Lilo & Stitch.

In the game the player plays Experiment 626 as he battles robots, mutated monsters (called Greemas), Experiment 621, and causes mass destruction. Disney's Stitch: Experiment 626 is about finding DNA for Jumba's illegal genetic mutations. The game is set as a prequel to the first movie, describing 626's destructive rampage around the galaxy until his capture by the Galactic Federation.Disney's Stitch: Experiment 626 is a basic platformer, with an environment for exploring, item finding and fighting enemies. Plasma guns are the standard armaments. With his four arms, Stitch can equip up to 4 at once, but only 2 when climbing or holding an object. There are 2 special weapons: a "Big Gun" that fires guided rockets which do massive damage and a Freeze Ray which coats enemies in ice. Platformers commonly include collectables that the player must equip and find to progress throughout the game. Stitch is under the control of Jumba at the time of the game, and he orders Stitch to find Dna samples, which assist him in performing more experiments. Squid bots allow the player to try and garner a "movie reel", these reels are used to buy various scenes from the movie. Stitch also can find gadgets to assist him in navigating the environment. Grapple guns are provided to allow Stitch to swing over hazardous substances or to reach difficult spots. A jet pack is also featured which can allow Stitch limited flight time. In the game, there are 900 DNA and 105 movie reels.

Disney's Stitch: Experiment 626 has many enemies in his dangerous and deadly quest for DNA. These include UGF soldiers, frogbots, heavy soldiers, Gantu's elite frogbots, mutant greemas and buzzers. Bosses include Dr. Habbitrale in his giant robot, 621 (after being mutated), and Gantu. 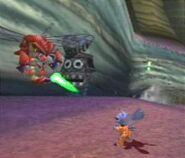 Add a photo to this gallery
Retrieved from "https://liloandstitchfanfiction.fandom.com/wiki/Disney%27s_Experiment_626_(Video_Game)?oldid=10177"
Community content is available under CC-BY-SA unless otherwise noted.