Lilo and Stitch Wiki
Register
Don't have an account?
Sign In
Advertisement
in: Genetic experiments, Females, Experiments,
and 7 more

View source
watch 01:36
We're Getting Mutants in the MCU - The Loop
Do you like this video?
Play Sound

A small blue experiment with a pitchfork-shaped head with an upside down arrow-shaped mark on her forehead, a pair of hanging ears, a small body, thin, hanging arms and a small lion-like tail and that looks like a cross between Holio and Heat. She is much smaller than most other experiments, measuring approximately half Stitch's height.

Designed to scare people with a loud high-pitched shriek. After a first encounter, the shriek becomes more of a painful annoyance than a source of fear. To amplify this effect, she possesses a wide, hinged mouth that spreads accross her entire face for maximum sound emission. Though if wishing, she can use specialized skin and muscle tissues to shrink her mouth down to the centre of her jaw line to express more fearfull or timid facial gestures.

Despite being created to emit this shriek, it is questioned if Belle was ever evil in the first place like the rest of the experiments. Initially, she showed no signs of aggression and always seems to have an innocent expression on her face, whether that be happy or fearful.

Covering ones ears or placing her into a sound resistant container.

At an unknown point, Experiment 248 was presumably activated in a rainstorm nearby the Ali'i Trail.

One night after 248 had been activated, Lilo,Mertle, Stitch,Jumba andPleakley were hiking the Ali'i Trail to settle a bet over the search for the alleged Night Marchers (an ancient Hawaiian legend).

After hiking for a while, Stitch detected something with his night vision. He caught a glimpse of 248 inside some bushes and a trail of footprints. However, upon doubleing back, she was gone.

When it suddenly started to rain, everyone took shelter in a makeshift tent. Lilo, Mertle, Stitch, Jumba and Pleakley then told each other scary stories. When Lilo finished telling her story, the group heard 248's screams, which were mistaken for that of Night Marchers and scared everyone.

Jumba later recognized the scream as one of his experiments, and the group soon found 248 standing on a rock. Lilo decided to name her Belle, a nickname relating to the word Decibel.

Like all of the other experiments, Belle was rounded up at the local stadium to be destroyed by Dr.Hampsterviel. However, Stitch, Lilo, Jumba, and Pleakley arrived just in time to destroy the giant lazer before it could fire upon the Experiments.

Quickly, a head-to-head battle arose between the Leroy clones and the Experiments. It can be seen in multiple frames that Belle charged ahead with the experiments, though it is obvious that she wouldn't have put up much of a fight, merely bystanding in several scenes before the battle was finally won. Afterwards, she and the other experiments were gathered for a family photo before returning to their true places.  After Leroy and Stitch Belle seemed to disappear from the series, making no appearance in the anime that followed.

Voiced by Tara Strong, Belle is known to emit an ear piercing shriek, making it obvious that she does possess vocal chords. However, it is unknown if she is speech capable in either English or Tantalong since she possessed no dialogue in the series or movie.

On Nani's night dresser as a new alarm clock. It is unknown how long she stays in this position, though it is obvious that she will eventually have to serve a different purpose as the years pass by. 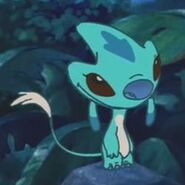 Waking Nani Up
Community content is available under CC-BY-SA unless otherwise noted.
Advertisement